Pipeline welding needs to be on point from beginning to end because any mistake could result in an environmental issue or lost profits, at the very least. It’s tough work for the welder for a variety of reasons, but it’s not an easy job for the welder’s helper, either. Proper preparation of the pipe is important to produce quality welds and minimize defects. Using the right product helps ensure high weld quality and saves time so workers can be more efficient to meet tight deadlines.

In an effort to make life easier on the pipeline, particularly for the welder’s helper, Weiler Abrasives was allowed access to a number of pipeline jobs to gain insight into how to better develop products and solutions with feedback from pipeline welders and helpers. 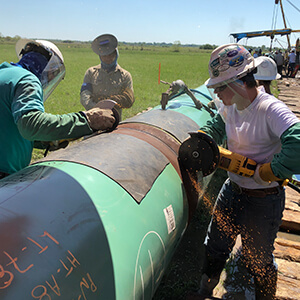 “When we approach a project, which relies on our ‘voice of the customer’ process, we do a lot of in-house research and field research to learn how our customers think,” says David Jescovitch, abrasive specialist manager at Weiler Abrasives. “For the pipeline project, we talked to the contractors, distributors and the labor itself – the welder, welder’s helper, foreman, superintendent, safety people and the toolroom guy who supplies products to the labor. We asked them how they do their jobs, what would make it better where the problem areas lie. As we talk to them, we’re observing, as well, because there is occasionally a difference between what we hear and what we see.”

In addition to prepping the pipe for welding, Weiler Abrasives focused on the pipe gang where the pipes are welded together and where the root pass gets ground. The workers join the pipe, lay the root pass, grind it with their pipeline grinding wheel, run the hot pass and then the firing line takes over to run the filler and cap passes.

Following the root pass, it is necessary to grind the weld to ensure proper penetration for the hot pass. The hot pass burns out the slag and potential hydrogen trapped by the slag. This is typically done using a 1/8-in.  pipeline grinding wheel along the root pass, which helps create a flat or U-shape at the bottom of the weld. Some pipeline grinding wheels are designed to be used only on their edge, perpendicular to the workpiece.

“That was one of our key findings,” Jescovitch says. “Operators use that same pipeline grinding wheel to do other types of grinding, such as prepping the pipe bevel by using the face of the wheel. There are grinding wheels specific to just grinding the root pass; they’re not made to grind using the face of the wheel. They’re unsafe to be used for that, and it clearly states that on those specific pipeline wheels.

“Pipeline wheels typically have only two layers of fiberglass and as you grind on the side, you wear through one piece of that fiberglass,” he continues. “It has a high chance of cracking or breaking.  Two layers are okay for grinding a root pass, but you shouldn’t use it for facing or on any kind of angle grinding. We found very few people recognize the difference.”

Another problem Weiler Abrasives witnessed on the jobsite was grounded in bad, outdated habits. Prior to grinding the root pass, the welder’s helper often puts little chips or notches around the edge of the wheel to clean the wheel as it loads up with material on the edge. 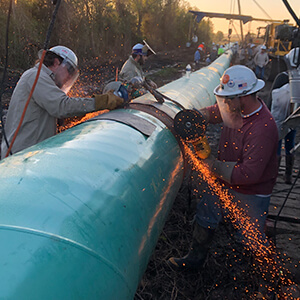 “The welder’s helper has been taught – welder helper tips and tricks, if you will – that if you put a chip in the wheel, it kind of stops “loading” and cleans itself out and then continues to cut,” Jescovitch says. “But by doing that you are altering the wheel. You’re cutting through those layers of fiberglass, which help the wheel stay together. This is a dangerous practice that can result in flying debris and potential injury.”

One solution is to use a wheel designed specifically for cutting and grinding. However, many of them have a fairly short lifespan when grinding a root pass. Fortunately, that’s not the case for Weiler’s Tiger Pipeline grinding wheel, which has been designed to last a long time without loading or reducing wheel life on the hot welds on the root passes.

Another issue Weiler Abrasives discovered on the pipeline was that chatter and vibration take a huge toll on the welder’s helper. Yet again, it was an instance where the wrong tool or product can have a huge impact on productivity, not to mention the health and safety of the operator. When working on larger diameter pipe – between 16-in. and 42-in.-dia. pipe – the last thing a welder’s helper wants to do is work harder because they have insufficient equipment.

“Holding a grinder all day is hard enough, but at the 12 o’clock position and the 6 o’clock position, it is purely arm strength that is holding the grinder,” Jescovitch says. “That is one hard day’s work. So, any time the grinder starts vibrating or chattering, it’s an issue. If it starts jumping out of the root pass, the wheel is going to hit the wall of the pipe. At the very least, it’s going to scar the side of the pipe or worse yet, grind away too much material, which will require repair work.

“Any welder’s helper will tell you in a minute how much they hate when the wheel vibrates,” he adds. “Not only because of the inherent danger or damage it can do to the pipe, but also because they have to work way too hard.”

Based on Weiler’s fieldwork, their Pipeline wheel has been formulated to reduce chatter and vibration. The result is a tool that provides the operator with increased comfort while keeping the wheel from jumping out of the weld area.

In addition to studying the stick welding performed at the jobsite, the team at Weiler Abrasives learned the nuances of mechanical welding, as well. “I learned very quickly not to call it automated welding,” Jescovitch notes. “It is mechanical welding, and it takes a great deal of training and precision to have the machines operate efficiently.”

While mechanized welding is not new to pipeline construction, its popularity seems to be increasing. Once the equipment is set up, it can move at a fast pace and produce a couple of weld layers at a time, making it an incredibly efficient process. However, it works best for large-diameter pipe running straight without a lot of terrain differences or tie-in work. 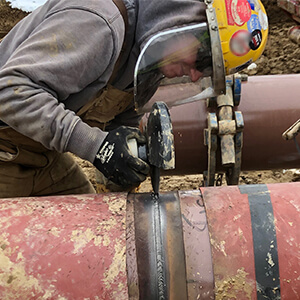 “One of the advantages of mechanical welding is that it uses a lot less material,” Jescovitch says. “On a typical stick weld, the angle of the bevel is 37.5 degrees to form a nice V shape. With mechanical welding, the weldment required to make a solid weld is greatly reduced, so they can use a J bevel or K bevel, where the angle can be as little as 10 or 5 degrees.

“These larger diameter pipes have thicker walls so it’s harder to get a grinding wheel down in there to grind the start and stop of the weld,” he continues. “The grinding wheel itself needs to be placed in just a 1/8-in. gap, typically. And the helper only has 5 or 10 degrees with which to work without otherwise hitting the sidewall of that bevel, which causes scarring. So a very common problem is getting a 1/8-in. grinding wheel to fit down in there. Or, we found some people go to the other extreme and use a small cutoff wheel, which quickly wears away to nothing.”

Because of the nature of a mechanical welder, the next weld follows the exact pattern as the previous; it doesn’t have the ability to determine that an adjustment needs to be made to cover the defect. When the weld is tested and the flaw is found, it ultimately is rejected and must be repaired, which is extremely expensive.

Weiler Abrasives’ solution is the Tiger Mech pipeline wheel, which is designed for applications on mechanical pipe welds. The wheels are manufactured slightly thinner than a standard 1/8-in. standard pipeline wheel, allowing the welder’s helper to grind the starts and stops of the weld bead without widening or scarring the narrower channel used by the mechanical pipe welding process.

“The real benefit of the Mech Wheel is that it greatly helps reduce rejects because it allows the helper to keep that wheel from jumping outside of where is should be,” Jescovitch says. “It helps to reduce the weld reject rate, which is a huge cost savings.”

Transitioning work on the pipeline was another area where Weiler Abrasives’ voice-of-the-customer process was invaluable. Transitioning can be used when the pipe changes from one wall thickness to another or there is some tie-in work being done. Like other facets of pipeline production, Weiler discovered that this type of work can also benefit from jobsite education.

“The pipe isn’t always perfectly round so it might need some altering,” Jescovitch says. “It’s a demanding application, but when the helper uses a wheel that’s not designed to grind the ID, safety concerns can arise.

“While you can use our Pipeline wheel, we also showed them at the jobsite an ‘old school’ Type 28 grinding wheel that can be used for that application,” he says. “This style of wheel is exceptionally aggressive because of the angle at which it is built, which is good for transitioning.”

Throughout the process, Weiler Abrasives also learned a lot of details about how to make improvements based on jobsite needs. The company recognized the importance of making the label easier to read, which makes it easier for the toolroom manager to find it on a shelf. Putting the appropriate amount of products in one package is also important to reduce excess packaging materials on a jobsite.

“The last thing you want to do on a jobsite is leave trash lying around,” Jescovitch notes.

At the end of the pipeline day, quality and productivity are important – but safety is critical. Following proper safety procedures can help maximize product performance and efficiency while also contributing to a safer environment for operators and nearby workers.

“We developed new products based on the voice of the customer, but our most important goal was and is to bring awareness to the industry about the safety issues that can arise when using the wrong product,” Jescovitch says. “It’s certainly dangerous for the operator, but typically for 16-in.-dia. pipe or larger, there is a welder and a helper on each side. By using the wrong product or altering it in an unsafe way, it endangers everyone in proximity to the work.

“Beyond the safety component, we’re focused on helping the operators be productive throughout the day in a very difficult job,” he concludes. 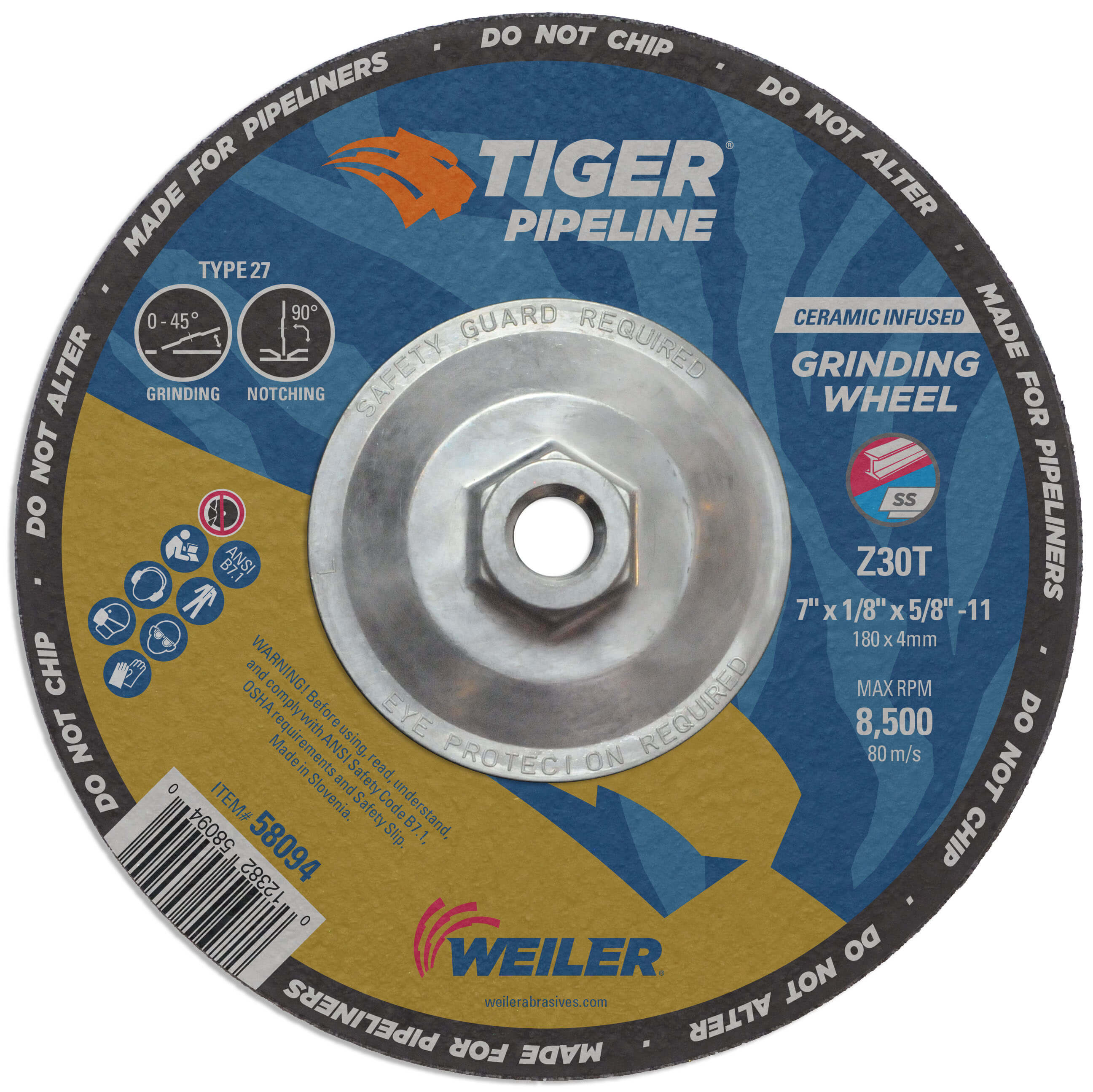